Is Singapore a Good Country?

What is a "Good Country"? Good for whom?


At 12:13, he summarises what he means: The "Goodest" Country is one that gives more to humanity than any other country.

Here is the score sheet for Singapore: 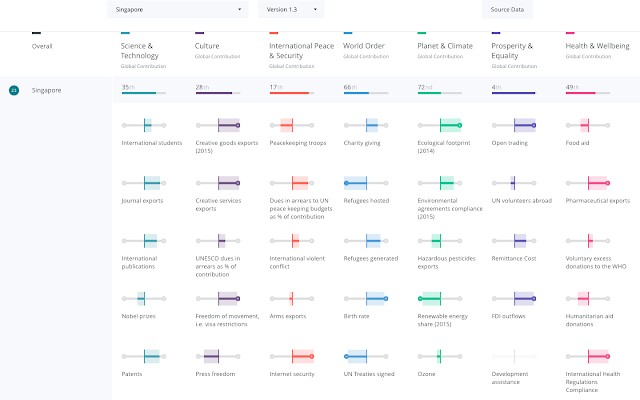 Our highest rank is for "Prosperity and Equality" - ranked 4th.

Really? Aren't we agonising over the inequality in Singapore?

Ah! But that's an internal issue. "Prosperity and Equality" here refers to SG's efforts in the world, and we score high for Open Trading, and FDI outflows.

Our next best ranking is for "International Peace and Security" where we are ranked 17th. We are being recognised for paying our UN dues on time, and our internet security. Whatever that means.

Other aspects we scored high are "Ecological Footprint" (at least in 2014), Compliance with Environmental Agreements (2015), and International Health Regulations, and Pharmaceutical exports.

We got a good score for "Birth Rate" but that's because our birth rate is low, and that's good for the world, because we are not contributing to population growth. I think.

We also get a good score for not generating refugees.

So all the above relates to SG's score. And we ranked 23rd.

How did our neighbours and "benchmark countries" do?

Canada is 10th. Canada is the highest ranked non-European country on the list. But it is a Western nation.

New Zealand and Australia are also not European, but are western cultures.

Singapore and Japan at 23rd and 24th are the first two non-Western cultures in the list. Though one MIGHT argue that SG is quite westernised.

U.S. is currently 40th. Just above the Russian Federation at 41st. US has slipped from 21st in 2014 when Anholt presented his first ranking. And Russia has improved from 95th position.

India is 44th. Malaysia is 46th. And they would be pleased that they are above Israel at 52nd.

But Anholt's concern about "Good countries" being the province of rich countries, seems to be more true in the latest ranking.