Suspicious of bike sharing? Wondering how this business can be viable or sustainable?

Looking at all those bikes in the bike graveyard, at all the bikes piled high in "bike mountains" (not mountain bikes), and abandoned indiscriminately and you have to ask yourself, how is the bike sharing companies making money? (The short answer is, they are not. The answer in this video is, they made their profits by "selling" the idea of bike sharing, and taking their share of the investments pouring in. Which is probably the simplest part of the equation to understand.) 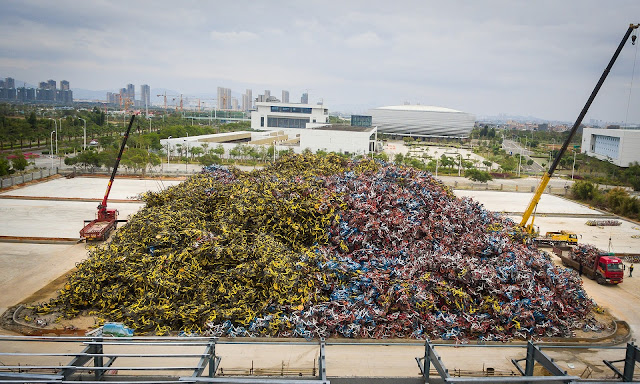 Some info on their fund-raising:


Mobike... using a newly-raised $600m fund... now has a foothold in Singapore and London, and is penetrating Washington DC as its pilot city in the US.
Ofo, on the other hand, has received $700m new investment for future expansion.


But look at the mountains of abandoned bikes (picture above, and especially in the Oct video). Who made those bikes, how much did they sell each bike for, and are they profiting from it, and do they care if bike sharing is viable or the business model sustainable, or what exactly is their payoff?

The bike makers (Fuji-ta & Foxconn for Ofo & Mobikes respectively) can make tens of millions of bikes a year (from one news report, the two can make 30 million bikes a year).

The other thought to strike me when I see the mountains of bikes is that somewhere someone is producing all that steel for the bikes (or aluminium? Is that sturdy enough for the abuse of shared bikes? Would it be too expensive). China's steel mills are having overcapacity.


Consider steel. Currently China’s steel mills can turn out some 1.1 billion tonnes of the metal annually. Yet even with economic stimulus efforts in full swing, no one expects domestic demand to exceed 700 million tonnes this year.

China's Belt & Road initiative which proposes to build infrastructures in developing countries, is intended to soak up this excess capacity.

In the meantime, there is Mobike and Ofo bikes and the many little copycat startups.﻿

When you look at the mountains of abandoned bikes, one thing is clear - the owners of those bikes don't see those bikes as valuable assets that would make them money. Otherwise they would be more concerned about the care and maintenance of their bikes and retaining those bikes. Wouldn't you be concerned if those bikes were making you money?