Can PAP hold Potong Pasir, or will it fall the next election?

It is still a weak constituency for the PAP. Assuming the PAP do not absorb the constituency into a GRC, the PAP will still have several advantages. Firstly, Sitoh can work more openly and reflect the wishes of the electorate more effectively. Public works can be enhanced. He can do more to win the voters over. And hard-core Chiam supporters may move out (say to Aljunied?) or move on (i.e. shake off this mortal coil).

On the other hand, the next election, Chiam may try to retake Potong Pasir himself. It may be hard to defend against his personal attention, but again if the old supporters have moved on...

Nicole Seah's Party
The NSP has turned out to be arguably, the biggest loser in this election for fielding the most candidates and having nothing to show for it. Perhaps their A-Team should have Nicole, Hazel, and Tony. I have not heard Nicole in person, but Hazel and Tony have not impressed me.

The other biggest loser...
Would be the Singapore Democratic Alliance. They failed to file their nominations on time, and the only candidate to lose his deposit was from the SDA. This loose alliance isn't likely to get any tighter and I think its time has passed.

The so-glad we're no longer the lose-iest party...
title goes to the Singapore Democratic Party, for most improved party with the likes of Vincent Wijeysingha, Tan Jee Say, and Ang Yong Guan. Of course, this party was so far down, they could only come up. This is a party of principles. But if they want to win enough votes, they will need to translate those principles into concrete promises the voters can get behind. I don't see them taking any seats from this perspective. But 3 - 5 years is a long time.

The party formerly known as the Reform Party...
needs to work out a better battle plan. The enemy is the PAP, not your members. But I fear this party suffers from Multiple Personality Disorder. The moment there is more than one Personality in the party... Disorder!

But really, everyone should just join WP. If not everyone, then SDA and Reform by the next election.

SPP and SDP maybe in the election after next. And NSP after 2021.

All this assumes that WP don't collapse.

Workers Party
By focusing on branding, WP has the right idea. In the next election, they can split their A-team and leverage on the GRC system. Some can anchor Aljunied, while 2 of them, say Low and Sylvia, can boost the appeal of their East Coast team and try to take one more GRC.


[April 2014 update: Over the last few years, Tan Jee Say had resigned from SDP to stand as a Presidential Candidate. This of course means nothing. He can re-join SDP (or any other party for that matter) to stand for the next GE (to be held by 2016). Meanwhile Vincent Wijeysingha has also "retired" from politics. I think he wants to have a more direct effect on things. Focus on his area of interests instead of trying to propel a political agenda.  Hazel Poa has resigned from the post of Sec-Gen of NSP apparently from stress. But she remains a member. Meanwhile the star and poster girl for opposition politics have left SG to Bangkok for her career. Well, this is nothing, or could mean nothing. She is still Asst Sec-Gen and still active in NSP. And still returns to SG for NSP meetings. But being away from SG will mean some loss of ground contacts. Enough to matter for an election? Who knows.?]

[May 2014 update. Tan Jee Say is announcing the launch of his political party. OMG.]

The Best of Times

Singaporeans became more politically aware and wanted the government to understand that they had issues with the way the PAP was doing things and they expressed that opinion, that anger, that fear, by fearlessly voting for the opposition.

So yes, the election result was the best possible result because no other result would have expressed the will of the people as they expressed it between 8 am and 8 pm of 7 May 2011.

Email ThisBlogThis!Share to TwitterShare to FacebookShare to Pinterest
Labels: Election 2011

From Fear to Anger 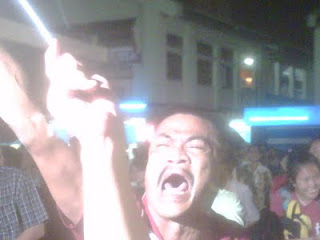 And so the Singapore voter has found the voice for their fear. And their screams of fear has become yells of anger. And the anger has been directed at the PAP.

The PAP has tried to blunt the anger, but the apology may simply be too late.

So anger leads to hate, and a vote against the PAP.

All that is left is to see if suffering follows.
Posted by El Lobo Loco at 23:31 No comments: