From a 2007 article about Singapore's preparation for the rise in sea level from melted ice and climate change.


SINGAPORE — Surrounded by sea and almost pancake flat, Singapore is without doubt vulnerable to the rising sea levels many scientists predict global warming will cause.

While topographical maps are considered a military secret here, anyone flying into Singapore can easily see that the island is elevation-challenged. Its highest point is a jungle-clad hill rising 165 meters, or 540 feet, above sea level. Most of the business-end of Singapore - its airport, its business district and, of course, its busy container ports, lie less than two meters above sea level.

Faced with the prospect of a long, slow submersion into the very waters that serve as the lifeblood of this maritime trading hub, Singapore has reached out to the world's greatest experts on the subject of battling back the sea - the Dutch.

"We are already in consultations with Delft in Holland to learn how we can build dikes," said Lee Kuan Yew, the former prime minister, in an interview last Friday.

Delft Hydraulics, a research institute and consulting firm specializing in water management issues in the canalled Dutch city of Delft, is already helping Singapore convert its biggest river and marina into a huge downtown reservoir. Now it is also helping the city-state look into just what it can do to defend its roughly 200-kilometer, or 125-mile, coastline.

"We feel we have strong reasons to be concerned, but no reasons for panic," said Vladan Babovic, director of the Singapore Delft Water Alliance, a $43 million research center opened in February between Delft, the National University of Singapore and the country's water management agency, PUB Singapore. "We will be able to resolve these challenges," he said.

Singapore got a preview of just what havoc rising sea levels could cause back in 1974 when a rare astronomical event caused the tides to rise 3.9 meters, more than double the usual level.

"It eroded the coast very badly," said Wong Poh Poh, an associate professor specializing in beach geography at the National University of Singapore, who studied the event. Areas along the Singapore River were inundated, as were parts of the airport and a coastal public park built on reclaimed land.

Wong later discovered that during such periods of elevated sea levels, the variations between high and low tide are accentuated, putting the country's reservoirs, many of which lie adjacent to the coast, at risk. Singapore officials later used one of Wong's reports to draw the attention of the United Nations to the problems associated with global warming.

Still, no one is certain just how much of Singapore is vulnerable to the problem. The Singapore Delft Water Alliance and researchers at the national university's Tropical Marine Science Institute began a study into the potential effects of climate change on Singapore (link broken) in March. But the leader of that study, Liong Shie-Yui, said that the group had yet to produce any noteworthy findings.

Assessing the risk is complicated by the fact that no one knows for sure just how much the sea may rise or how fast. Estimates vary from as little as 60 centimeters, or about 24 inches, to as much as 6 meters. And sea levels are not consistent from place to place: atmospheric pressure, wind and currents can cause variations.

Ultimately, Singapore is unlikely to build dikes per se, but rather concrete seawalls, Babovic said. Dikes are technically made of earth. After digging up and quarrying much of its own interior to reclaim new land that has increased Singapore's area by between 15 percent and 20 percent, Singapore now relies on imported landfill and sand for its reclamation efforts and to produce cement for new buildings.

Many scientists believe that dikes are no longer the most environmentally sensitive solution. Wong recommended docks and seawalls back in the early 1990s but now said that more natural structures might work better.

Babovic said that scientists were studying ways to incorporate mangroves and sea grasses into the design of dikes and seawalls to improve their environmental impact and make them look better, too.

"You need more imaginative solutions," said Wong. "What we don't want is to put something there that will constrain future use."

Singapore is mostly prepared for such sea level rises. A 2m rise should not affect Singapore too much and we should have time to raise levels to prevent flooding. Even a 7m rise would be mostly survivable.

Here is photo of a simulation of what a 6m rise in sea level would do to SG. It is not immediately obvious. 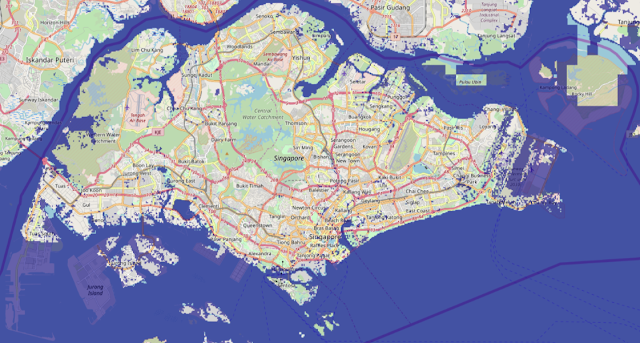 Most of Jurong Island, significant parts of Ubin and Tekong and the reclaimed land at Tanah Merah Ferry Terminal would be under the new sea level (that is 6 m higher).

But there are also other incursions by the sea. Some parts of SG are less than 6 m above current sea level and the rise in sea level would mean that they would be below sea level. BUT... whether they are actually flooded will depend on various factors.

If 6 m sea rise seems optimistic to you, here is the map at 20 m sea rise. This is of course a projection, and the data may be a little out of date. 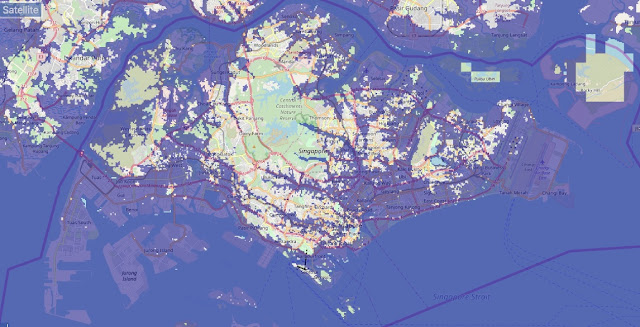 But as you can see, at 20 m there will still be a Singapore. But a lot of it would be flooded.