There was a CNA report from McKinsey that ranked Singapore's public transit one of the best in the world.

Immediately, the disgruntled conspiracy theorists suggested that this report was paid for by the Singapore govt.

You know, to make the PAP look good.

This is the summary of the report in a chart form: 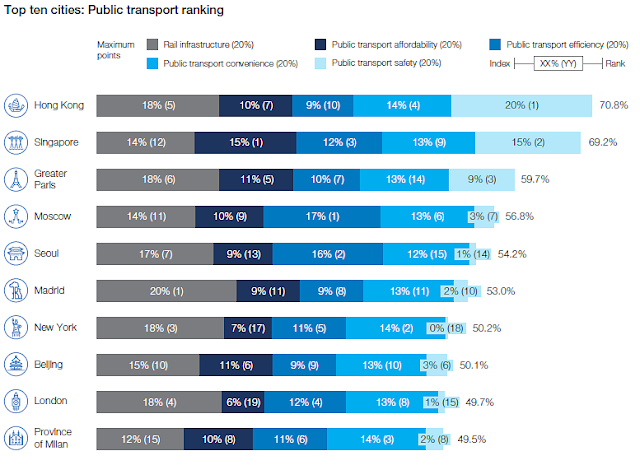 But if we put cynicism aside, the ranking and scores make sense. I do believe our fares are the most affordable. Certainly more affordable than HK. It has been some years since I was there, but my recall is that HK's transport system then was a bit more expensive.
In terms of safety, we have had a few incidents, so we can't be on the top. McKinsey gave HK a PERFECT SCORE for Safety. I do not know if it is earned... or "bought". :-)
12th in Infrastructure? With all the breakdowns, it would be suspicious if we were in the top 5. Or even top 10. Madrid got a perfect score on infrastructure. I have no way of knowing personally.
9th for convenience? Again based on limited personal experience while in HK, HK does seem a bit more convenient. But I can only vouch for the service in and to touristy areas.
What the report points to is that our system has room to improve in Convenience, and Infrastructure. Which will take time and there are steps in that direction.
And although we are 3rd in Efficiency, our score is only 12/20 which suggest that it is not so much that we are efficient, but that most other operators are inefficient. We have room to improve on this.
Or we can just be cynical and suggest, with no evidence other than the intent of a cynical black heart, that it was all paid for.


Anyway, the above was simply based on the CNA's news report of the McKinsey Report.

Which I downloaded (you can too!)

And on page 7 of the report, they explain their process of how they narrowed down the selection of the cities for this report, from about 13,800 cities to 24 cities.

At step four of their process, they winnowed 27 cities to just 20 by selecting only those where at least 50% of data is available from international sources. This suggests that the information is NOT controlled or provided by the SG govt.

Singapore was added to the 20 because it was considered outstanding by external institutions. Or you can continue to believe that the four "bought" their way into the report. But apparently Berlin and Shanghai didn't pay McKinsey enough (because only SG & HK made it to the top ten).

The report did not find that any city was the "absolute winner" scoring well in ALL categories. Or you can believe that McKinsey "sold" their reports piecemeal - you need to pay separately to score high in the 5 categories. So they get to sell their report FIVE times!


If we were to derive the formula for an ideal transport system, it would be as available as in Paris, as affordable as in Singapore (where public transport is very affordable despite high barriers for car usage), as efficient as in Seoul, as convenient as in Toronto, and as safe and sustainable as in Hong Kong.

So the cynic would believe that Paris, Singapore, Seoul, Toronto, and Hong Kong "bought" their rankings.

I just want to point out that I am as conspiracy-minded as any cynical Singaporean.

But if you were to read the report itself, you will realise that any conspiracy theory is simplistic, and obviously ignores the content of the actual report.

The chart above is just the one on the top ten cities in public transport (page 24 of the report).

The report goes on to summarise Singapore's transport system thus:


Singapore is among the top-ranked cities for public transport, and also has among the safest and most ecologically sustainable systems. However, the city continues to evolve. As the population is expected to grow to more than six million people by 2030, the government is improving the existing transport network by building a new terminal and runway at Changi Airport, extending and increasing the reliability of the Mass Rapid Transit (MRT) system, opening more cycling paths, and launching EV sharing and taxis, among other initiatives.

Singapore has created a best-in-class public transport system, which is accessible, efficient, convenient, sustainable, and at the same time affordable.

ƒAffordability is another advantage. A major step toward affordability was made in 2013, when the fares were reviewed and new measures were introduced, including a 15 percent discount on adult fares for low-wage workers, free travel for children, and seven other concessions. As a result, more than one million public transport passengers benefited from the new scheme.

ƒThe convenience and flexibility of the Singaporean ticketing system is another outstanding feature. The EZ-link card is the unified contactless stored-value card, introduced for public transport in 2002. The scheme successfully blends the major ticketing advances—it can be topped-up via multifunctional EZ-Link App, lets users earn and redeem reward points for all transactions made with the EZ-Link card, including non-transport services. In 2017 LTA piloted paying for bus and train rides with credit cards.

The residents greatly appreciate their transport system and how it has evolved over the last years—they are the most satisfied on 13 out of 14 aspects analyzed, both in terms of their transportation’s current state and its changes, as compared to residents globally.

The electronic services and their evolution are among the transport features that residents enjoy most. LTA continues to enhance these: in 2016 it started partnering with four leading tech companies, Citymapper, Google, Hugo, and Quantum Inventions, to develop new enhanced trip planners, which incorporate transfers into planning intermodal public transport routes.

Singaporeans tend to be very satisfied with their city’s external connectivity, although it lags that of other cities. Given that it is an island/city-state, the city’s absence of domestic flights is expected, and undiminished by the number of international flights offered.

The only concern of the residents is affordability of private transport, which coincides with the objective indicators. However, this is the result of deliberate a car limiting policy, which includes relatively high costs of buying a new car (more than $74,000 for a small SUV), the requirement for a special certificate from the government to start driving (up to $37,000) and a charge to drive to the city center.

Overall, I believe the report is generally accurate, and objective.

You are of course free to come up with your own conspiracy theory about it.