Unthinking in the internet age 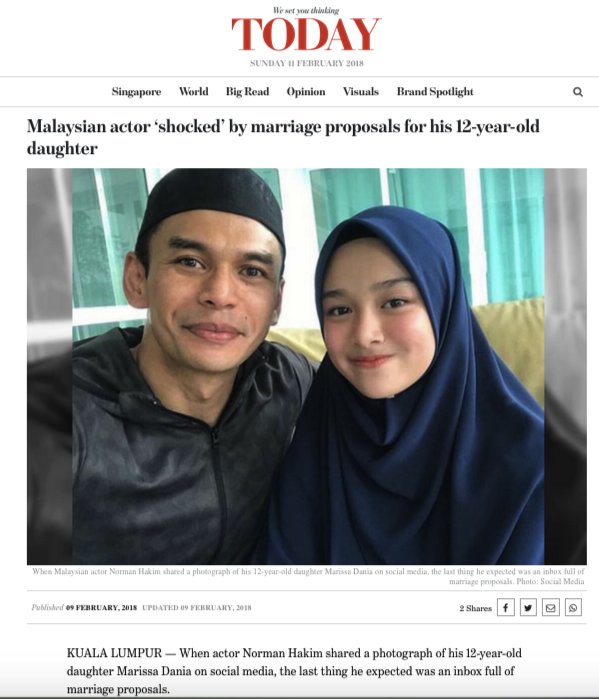 There was this news article about a Malaysia actor who posted a photo of his 12-year-old daughter on Instagram. Then, he got emails with marriage proposals for his daughter.

My personal view and opinion, based on what I see and read on the internet is that parents should not post pictures of their children on social media.

First, there are lots of perverts on the internet.

Second, you are the guardian of your child's/children's privacy. They are too young to object to your posting their pictures. They do not even KNOW that they can object. You are implicitly telling them that posting photos on social media is ok. Then when they grow up you wonder why they post inappropriate pictures of themselves on the internet just to get "likes".

Third, yes, you can set your privacy. Yes, you can restrict the people who are allowed to see the photos. Yes, you can do everything allowed by Facebook or whatever else social media you are using to minimise exposure. So tell me, how do you ensure that those privacy settings and policies are enforced and maintained? What happens when those policies are changed? Can you stop them from being changed? How?

So for every email the father got for a marriage proposal for his 12-year-old daughter, how many other indecent propositions or intentions were aroused, that he did not know about? How many times was the photo saved and shared to inappropriate sites. Yes, I mean pedophile sites.

But if you, their parents won't even do that, why should anyone else, and why should they?

Here's someone who thought about it:

I followed this channel/YouTuber previously, and was a little sad when I saw this video. And then I realised that it was an incredibly thoughtful video. And a really important message.

You can also check out the companion video where the husband explains to their Japanese audience.