Perspective from The Little Red Dot: the HK Protests 2019, and the future of Hong Kong

In June 2019, HK had a series of protest over the HK Govt's proposal to pass a law allowing people in HK to be extradited to China.

This is reminiscent of the 2014 Umbrella protests.

Here are two news reports (links may be broken after some time), which I have extracted just the first few lines which suggests that the protests are having some effect. I have also extracted a few additional lines from the second report which I feel makes a pertinent point.

HONG KONG: The Hong Kong government has postponed the second reading of a proposed extradition law that would allow people to be sent to mainland China for trial amid worsening protests, it said late on Wednesday morning (Jun 12).

Thousands of demonstrators had earlier taken to the streets and stormed a key road next to government offices to protest against the bill.

Television pictures showed thousands of protesters rallying in and around Lung Wo Road, an important east-west artery near the offices of Hong Kong Chief Executive Carrie Lam, as hundreds of riot police warned them to stop advancing... 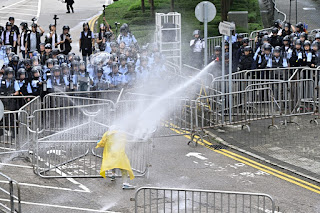 HONG KONG: Hong Kong's government has indefinitely delayed the second round of debate on an extradition bill that would allow people to be sent to mainland China for trial for the first time, after chaotic protests by tens of thousands of people.

Hong Kong residents, as well as foreign and Chinese nationals living or travelling through the global financial hub, would all be at risk if they are wanted on the mainland....

... closing what Hong Kong government officials have repeatedly described as a "loophole" that they claim has allowed the city to become a haven for criminals from the mainland...

A long-forgotten issue, the need for an eventual extradition deal with the mainland was acknowledged by government officials and experts ahead of Hong Kong's handover from British to Chinese rule in 1997 under the "one country, two systems" model.

The city maintains a separate and independent legal system as part of the broader freedoms the formula guarantees. Little progress has been made in discreet talks since then with justice and security officials on the mainland, where the Communist Party still controls the courts.

A YouTube Channel I follow is China Uncensored, and this was one of their first report on the protest:

The title of the video is provocative - "Giant Hong Kong Protest Could Change Everything".

It notes that 1 million protesters is a huge segment of the total population of 7 million people in Hong Kong.

My question as I watch the protesters (officially called 'rioters' by the authorities) clash with police is, why are the HK police still holding the line?

If 1 in 7 Hongkongers is in the protest/riot, then many of those police officers will have friends and relatives protesting.

The protesters can win, when the police defect to their side.

Unless the PLA are right behind the police as an implied threat...

BUT... even if the PLA is NOT actively threatening or "backing" the HK Police, what does "winning" mean for the protesters?

That the proposed extradition legislation is NOT passed?

Did the lack of such a legislation stop the Chinese Govt from...er... "arresting" the... er... "dissident book sellers"?

The Chinese govt has started to take the position that the deal with the British to guarantee the autonomy of HK for 50 years after the British handover in 1997, is no longer relevant (see above video at about 2:28).

The reality is that HK has been handed over to China in 1997, and even if the Chinese Govt keeps to the promise of not interfering in HK for 50 years, 2047 is only 28 years away, and the Chinese government plays the long game.

And a smart game.

In the video below, at about 10:40, China has appointed HK as the Centre for Technology and Innovation. This is to exploit HK's status as a free market and not subject to import restrictions. This allows HK to buy any technology...

Until the West wise-up and close this loophole. But even this is fine. It will just drive HK deeper into the arms of China.

The conclusion of this video (below) is that regardless of whether HK's best days are over, or still ahead, it is inevitable that HK will become more Chinese (as in PRC).

Can HKers stop this?

HK still has the advantage of being seen as a free market and and having no import restrictions to import technology and innovation. BUT as has been shown with Huawei, all this can change on a whim.

Of course, one could argue that keeping HK free (and not having that Extradiction law would contribute to that impression) is helpful to maintain that "free market" image. But with Trump in the White House, that is not exactly a sure thing. But Trump is not permanent.


Whether the protesters win or not, is ultimately irrelevant. Say they win. And "win" is defined as

Heck, what happens when Carrie Lam steps down? Someone else will step up to replace her.

And if it suits China to drop the extradition bill issue for now, they can afford to wait.

After all, they didn't need an extradition bill to... "extradite" the booksellers.

So they can tell whoever replaces Lam to chill and bide his/her time.

That is, if Beijing even wants to cool things down in HK and exploit HK's status as a free market.

Since 1997, a million chinese have moved into HK (at 5:11 of video above). Presumably, a million HKers or more, had also migrated. In the previous video, more than half the young people want to emigrate. And HKers has the resource (wealth) to emigrate. Well, some or a lot of them.

The latest reports are that there were about 2 million protesters making this the largest protest in HK. And with a population of about 7 million, this would mean that about 1 in 4 HK were out on the streets protesting. Even with a lower estimate of 1.4 million protesters (from another report I had seen), that would still mean 1 in 5 HKers were protesting.

I feel for the HKers. I do sympathise with them. I do hope they succeed and buy another 30 years or so of "safety" for themselves and their children.

BUT... HK will become more Chinese (politically), and that is... inevitable.

Any "victory" will be temporary at best.

On Monday 17 June 2019, Joshua Wong (from the 2014 Umbrella protests) was released (or will be as of this writing) from prison.

That could make things interesting, but in the long view, would it have any impact on 2047?

The point is, HK will revert to Chinese (as in Communist) rule. Can HK resist the inexorable pull of history? Can it be independent? Can it resist China? 7 million people against 1.4 BILLION people? Even if HK had an independent military, how large and capable does it have to be to be able to repel the PLA?

Even Taiwan may not be able to repel the PLA even with the (limited) help of powerful allies.

Here's another video update (sat 16 June 2019) on the events in HK by an independent source (which is generally critical of China):


Again, I feel for the people of HK. What they do, they do because they have to, not because it would change anything in the long run, but because it is what they believe and hold dear.

"When nothing you do matters, all that matters is what you do."


[Oct 2019 Update: The civil unrest in HK has evolved into sporadic (or ongoing?) street battles between the protesters and the HK police. The US House of Representatives has voted for a bill (still to be passed by the Senate) to "protect" Hong Kong by stopping export of tear gas and rubber bullets. What the protesters need is to watch this video:


Note though that this homemade gas mask works "best" if the user breathes slowly. Kinda hard to do when you are running for your life.]