Why Chinese Officials Are In Love With The Singapore Model

In this article, Kyle Spencer explains why China is enamored with SG's economic and political model, but how the Chinese underestimate the task ahead of them of emulating SG (in part if not in whole, and if this is indeed their intent).

However, the reasons for China's interest in the Singapore Model makes for a compelling argument for Singapore as an investment interest, and Spencer makes this argument well.

Spencer was not interested in defending Singapore or Singapore's model, only his argument that Singapore is a good investment. So in the original article he has this to say:

To hear the most enthusiastic of the pro-Singapore Chinese bureaucrats tell it, the only significant obstacle to adapting the Singapore Model to China is to stamp out corruption, and success will surely follow.

What the intelligentsia of the CPC fail to grasp is just how corrupt Singapore isn't. Transparency International ranks Singapore as the fifth least corrupt country in the world. By Singaporean standards, Germany, Japan, the United Kingdom, France and the United States are hopelessly and inexcusably corrupt.

China, on the other hand, is the 75th most corrupt nation. That means that China is more corrupt than Italy, about par with Columbia (sic), and only slightly less corrupt than Greece.

That's a long way to climb. 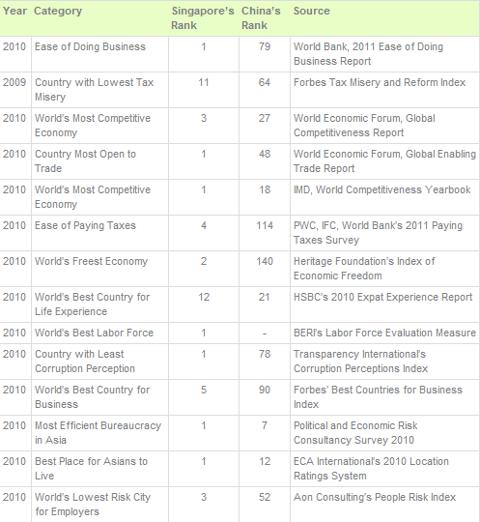 Spencer's reply to the question in the comments, "Is Singapore a Corruption Haven for the billions of dollars parked there by corrupt Indonesians?" was this:

"The global financial organization estimates that the amount of assets of Indonesian people in Singapore is S$87 billion, or around Rp506.8 trillion.

According to Teten, embezzlers prefer to deposit their funds in Singapore because they feel safe there although the origin of the funds is illegal.

The reason for this is that Singapore does not have a Money Laundering Law nor is it yet willing to sign an extradition agreement with Indonesia.

Through such an agreement, Indonesia can force Singapore to surrender bad debtors, including return of assets and funds.

Teten acknowledged that Indonesians also save funds in Singapore because of other factors, for example business.

This is because the business and investment climate in Singapore is very attractive.

"In addition, legal certainty is also good, far better compared to in Indonesia," he said."

If you're corrupt, you don't want to park your money in a banana republic, because there's no honor among thieves. You'd want the just the opposite: an affluent, bustling international financial center that doesn't ask foreigners inconvenient questions.

Singapore is the world's fourth leading financial center, but its success as such isn't built on corruption, it's built on Singapore's maritime supremacy and ease of doing business. Singapore is the world's second-biggest casino gambling market, one of the world's top three oil refining centres, the  world's largest oil-rig producer, a major ship-repairer, and a top tourist destination. The port is one of the five busiest ports in the world. Singapore has the world's highest percentage of millionaires, with one out of every six households having at least one million US dollars in disposable wealth. This excludes property, businesses, and luxury goods, which if included would further increase the number of millionaires.

Now, that being said, it's prosperity is linked through its reliance on exports to the broader global market,
specifically America. Historically, Singapore is the first to go down in the event of an acute crisis, but its also the first to recover. See:

As always, due diligence is a must.


The article Spencer quoted (and linked) was from Oct 2006. In Dec 2010, SG's Deputy Prime Minister and Defence Minister visited Indonesia and spoke to students of Indonesia's Defence University. One of the question was about the extradition of corrupt officials.

In brief, the answer to the students was:

1) Corrupt Indonesians and corruption in Indonesia are an Indonesian problem to be solved by Indonesia. Singapore solved the corruption issue internally. We did not need extradition of corrupt officials, or money laundering laws to be enacted by other countries. Even if such laws and treaties were in place, without addressing the root cause of corruption, it simply means that the fruits of corruption will be channeled elsewhere.
2) Singapore is willing to help and had in fact agreed to an extradition and defence cooperation treaty. Indonesia's parliament has refused to ratify the treaty.
3) Where the Indonesian Courts have made a finding or judgement as to corruption and the funds involved and made a court order, the Singapore authorities have complied with such court orders.